In Lectionary Cycle C, Sunday Gospels are usually taken from the Gospel of Luke. Gospels for the Easter Season, however, are taken from the Gospel of John. Today’s is one of the post-Resurrection appearances reported by John. In it, Jesus appears first to Mary of Magdala, second to all of the disciples except Thomas, and finally to Thomas and the disciples. After those appearances, John’s Gospel seems to conclude with a reference to other signs that Jesus gave after his Resurrection, which have not been recorded.

Because it follows this apparent conclusion, most scholars believe today’s Gospel passage (and all of John 21) to have been an addition to John’s original text. Because there are significant differences between this report and the other appearances described, it is quite likely that this story is from a different source. There are details in the story that recall Jesus’ call to Simon Peter and the other fishermen as well as the miraculous catch of fish (found in the Gospel of Luke, with parallels in the other Synoptic Gospels). The end of the chapter, where Jesus asks Peter three times whether he loves him, most likely is meant to represent the reconciliation that occurred between the community represented by John’s Gospel with the larger Christian community represented by Peter. This Gospel reading is a rich and textured story that speaks of Jesus’ presence in the Eucharist and our commission to serve others as Jesus did.

Last week we heard that Jesus appeared to the gathered disciples in a locked room, probably in Jerusalem.

In today’s Gospel, the disciples are no longer in Jerusalem; they are in Galilee, returning to their work of fishing. Simon Peter is still presented in the role of leader: when he announces that he is going fishing, the other disciples follow. They spend the night fishing but are unsuccessful.

Jesus calls to them from the shore, but just as when Jesus first appeared to Mary of Magdala, the disciples do not recognize him immediately. Still, they follow the stranger’s instructions and bring in a large haul of fish.

It is at this point that one of the disciples (the “disciple whom Jesus loved”) realizes that Jesus is appearing to them. Upon hearing this news, Simon Peter leads the way again, jumping from the boat and swimming to shore. The other disciples follow in the boat, dragging the fish.

The disciples have brought to shore a tremendous catch of fish that Jesus has directed them to find.

But once on the shore, they see that Jesus has already prepared fish and bread on a charcoal fire.

Jesus directs the disciples to bring their catch of fish as well. Jesus is host at the meal that follows,

feeding the disciples the bread and fish. In this detail we see allusions to the miracle of the multiplication of the loaves and the fishes told in John 6.

There are also allusions in the Gospel to our gathering for the celebration of the Mass.

In the Eucharist, we too are fed by Jesus in the bread and wine that have become his very Body and Blood.

We also find in this story insight about the Presentation of the Gifts at Mass. The gifts we bring to the altar,

bread and wine, are made from gifts that God gave first to us: grain and grapes, the fruit of the earth.

God has no need of anything further. Yet God accepts the offering we bring—bread and wine,

“the work of human hands”—and transforms our offering into the gift of his very presence. 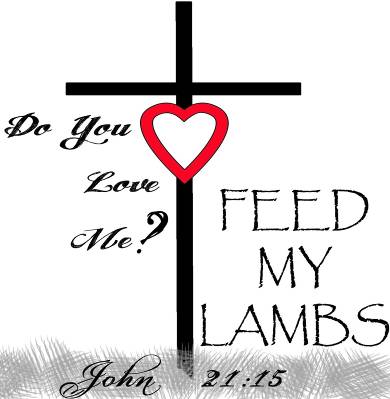 After the meal, Jesus directs himself to Simon Peter.

The community of John’s Gospel probably looked down

on Peter because of his denial of Jesus.

This dialogue with Simon Peter is a reversal of Peter’s three denials.

Peter is forgiven. Having been restored to friendship with Jesus,

Simon Peter is sent on a mission.

These commands indicate that Peter is to be as Jesus,

even unto sacrificing for the flock.

in the Eucharist, so he also sends us to follow him,

asking that we offer our lives in service and sacrifice.